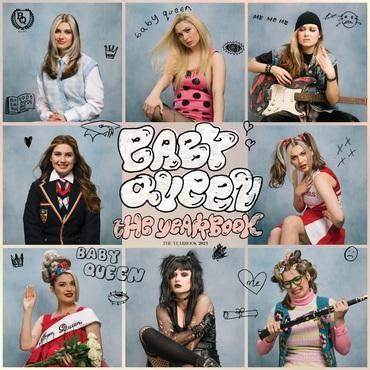 Bella Latham, AKA Baby Queen is wild and yet very conscious and critical about the world she lives in. Growing up in South Africa, she dreamt about becoming a ranger. Although growing up in South Africa might sound really amazing, she felt trapped in a small town syndrome. That reflects her songs and attitude very much. She sings about everything she aspired and wanted to be in a very pure, poppy, almost childish way. Baby Queen is so many alter ego’s in one that she can tell the world whatever is necessary. Just look at the cover of her new album “Yearbook”. And that’s where the truth is hiding behind the corner. Yearbook is about who you are and can become in a world full of fake projections and aspirations. But hey, It’s all about fun, don’t forget! That is why the sound is poppy, fresh and appealing.

We all want to be perfect, what makes us all narcissist in a certain way.

When we talk to  Baby Queen, she feels happy and relieved after performing for the first time after such a long period.

“I got it all out”, she shouts happily. “I was so pissed off, you can’t imagine.”

The raw truth about the album,  that is! We rarely hear someone express frustration in such a happy and cheerful way.

Cultuurpakt had a nice chat

I initially never wrote my songs for an audience, I wasn’t even thinking about pop music. It were my own true feelings at that moment in life. It was my pissed-off truth hand I thought I was the only one feeling that way. I felt like an outcast and started hating myself. Now, after making my music public, I notice that a lot of (young) people are feeling this way and it makes me feel good that they write to me about it. It’s an understanding that works both ways, kind of a connection. People don’t communicate openly about their feelings anymore and that gets us in such an isolation and pain because we feel ignored instead of unique.

So, when you really start writing for an audience, really in a targeting way, the honesty gets lots . A lot of people that are into art and music are sensitive people. They create another place where you can exist without pretending. We have to admit we all have some narcissism in our heart, social media proves it. During covid we only saw that part of the world, showing ourselves how society wants us to be seen. We have to realise that society wants to make us insecure, just to sell us something that will solve the problem.

I just want to tell people that it’s ok to be chaotic and have highs and lows. Life is beautiful and we should ridicule a lot more, discover the flipped side to the pain, party and get it all out.