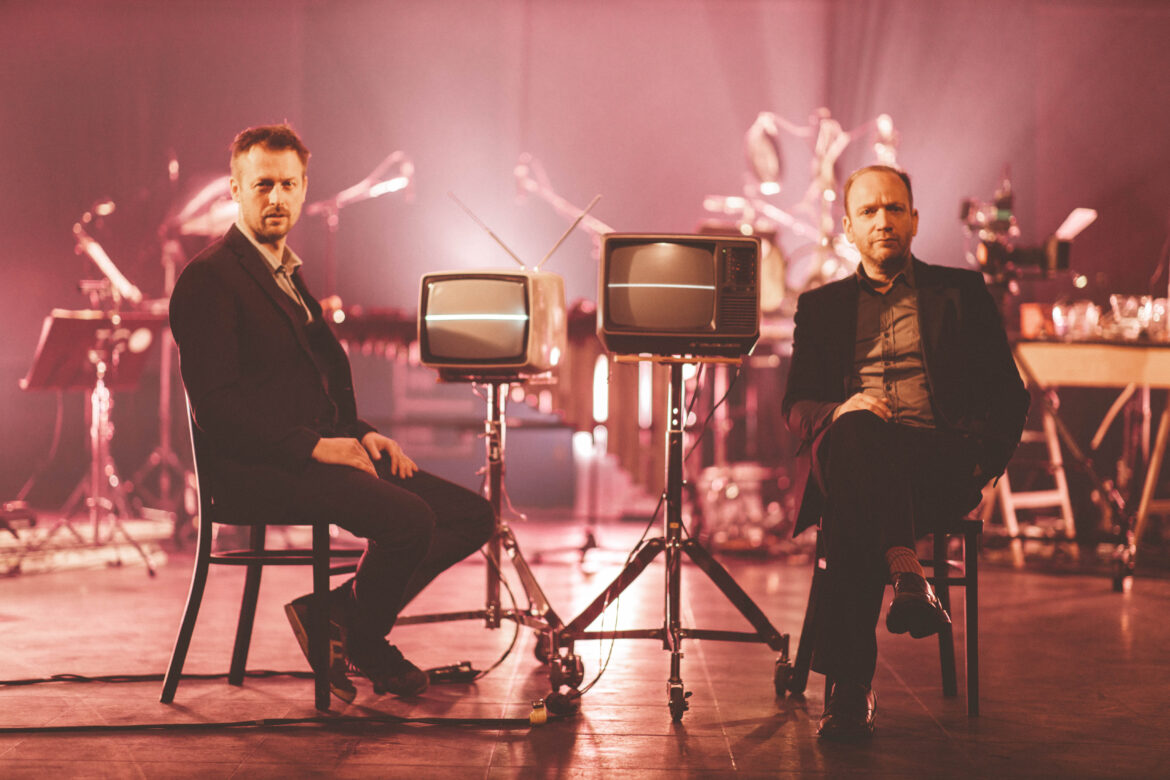 Photo Credit: Michelle Geerardyn
The Colorist Orchestra is an avant classical music collective led by Aarich Jespers and Kobe Proesmans that uses traditional and bespoke instruments in unorthodox ways to remix the repertoire of an invited artist. Their new single ‘Counting On’ is another stunning preview of ‘Not On The Map’, their latest collaboration with maverick songwriter Howe Gelb, coming this fall from Dangerbird Records.

The Colorist Orchestra on ‘Counting On’: “We made a rough demo that contained the structure and chords for a song. We met with Howe for a live recording, where we tried out some song ideas. Howe improvised some lyrics and melodies on the track that would become ‘Counting On’. The double feeling in the parlando verses leaves a lot of room for the cinematic lines of the strings. All the themes in the song seem to illustrate the different chapters in Howe’s story. The beat and bass are very basic, a contrast that we liked with the finer colors in the melodic arrangement.”

HOWE GELB on ‘Counting On’: “Well that was another one when I was going in they had a piece of music they wanted me to try to come up with some lyrics for. That was another one where I would just check in with Pieta, say “hey you got any ideas for me? What this song should be about, what I should think about.” And she said immigration or migrants, and I went OK I’ll give it a shot. And I started randomly coming up with four different scenes in history, the idea being that in each scene you had two people falling in love – you had a couple – and they were surrounded by the extremes of calamity, whether it was war or some harsh form of migration. The first verse was about of course the original people here and how they were treated when the Europeans came over, what we call the Indian Wars. The second verse was a couple of lovers that all the sudden were surrounded by the Nazi era in Europe, and the third one was the arab spring and how two individuals were caught up in all that, it became swirling around them, and the final one was the long trek when 5000 folks were fleeing south america and coming up only to be stopped at the border way back when, I don’t know how many years ago that was now – four, five years ago. So these are just random things that pop into my head where I was just trying to focus in on two people that were falling in love, but this is what they had to deal with. It’s really hard to listen to the details inside each verse, I’m practically whispering and babbling and just talking in tongues, just going off on what it is I think I’m seeing. It’s not very coherent, but the chorus basically sums it up each time, saying all those people are counting on everything we’ve already counted on.”

American press about ‘Counting On’:
“Gelb with The Colorist Orchestra is a prismatic musical experience, a marriage of experimental and experiential elements conjured by both sides.” – American Songwriter

“One of the more unique collaborations that’s cropped up so far this year”
“There’s something sinister about the strings-and-xylophone combo, with Gelb’s near-Cohen-like croon abetting the mood.” – Flood Magazine

Over a 30+ year career beginning with his trailblazing indie collective Giant Sand, Gelb has proven himself no stranger to experimentation and reinvention. When Jespers and Proesmans first approached Gelb, the intent was to apply the Colorists interpretive approach to Gelb’s expansive and diverse catalog, but they quickly discovered that there is little about Gelb’s creative method that involves sticking to a rigid plan.

Based in Antwerp with eight members including Jespers and Proesmans, who are percussionists, The Colorist Orchestra likes making sounds at different tones and frequencies with things that are not actually instruments as well as instruments they’ve made or altered. Once they find the sounds they want, it all gets written down and rehearsed: every groove, string, chord and chime. Best-known for their 2016 collaboration, The Colorist and Emiliana Torrini, The Colorist Orchestra has also toured and recorded with Sumie, Cibelle, Gabriel Rios and Lisa Hannigan.

Until now, all of The Colorist Orchestra’s previous releases were built around meticulously rehearsed and arranged live performances of songs from their collaborator’s catalog. But ‘Not On The Map’ is entirely new material. Perhaps the perfect summation of the project came from Proesmans’ 11 year-old daughter, after first hearing the latter tracks. “You have Howe, and he’s creating a world,” she said. “And then you guys create the ocean around it.”